I’ve been working on vehicles since I was a teenager. As a young broke idiot I had a lot of crappy motorcycles and cars that required near constant repair. Being a broke teenager, I bought cheap hand tools that would either break of get lost. I kept them in a bucket and when I needed something I’d just root around until I found it 1/2 inch and 9/16 sockets were the ones I used the most, so I had the fewest of them. I’d have to dig through a pile of 5/8 inch sockets to find a 1/2 inch.. This went on until my mid 20s, when I treated myself with a Craftsmen mechanics tool set for my birthday.

25 years later, I’m still using that same set of tools. They came in a case where each tool has a place and I forced myself to always put them away after every use. Good quality hand tools are so important for bus life. You’re using them constantly throughout the build process, and any maintenance or repair jobs you have to do you’ll be glad you’ve got them.

A few days ago I was working on the WanderLounge. I got an opportunity to buy an awesome high output Bosch alternator at a great price, but I needed to verify it would fit. Well, presumably they installed it with the radiator out and used a massive impact gun, and used the wrong size bolt, it just wasn’t moving! I had “good enough” access to the bolt (from above and behind), but I just didn’t have the leverage to get it to spin. I ended up with a 3/4 inch socket on my 3/8 drive ratchet, with a 5/8 socket over the handle connected to both my 6 and 3 inch extensions, and a 3/4 inch wrench on the end of that.. With both hands and some unattractive grunting noises I was finally able to bust that thing loose. No way would a set of lesser tools have put up with that punishment. I wouldn’t have attempted it with some crap from Walmart, my knuckles still remember the days of busting wrenches, ratchets, and sockets. 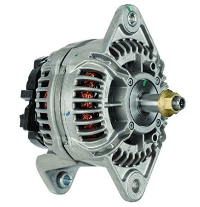 The set of tools I bought were replaced by a new set (with more tools!) but that’s still what I recommend. Craftsmen tools have a lifetime warranty and you actually can go to a Sears and swap a broken one for a replacement with no hassle and no receipt necessary. With that said, I’ve yet to break any of the tools in this set.

The new tool set is here:

The alternator is here:

Come see us at the United Tiny house Fest in Pinel

Went down south a couple hours to see this guy, dr

The new issue of potato is out guys.